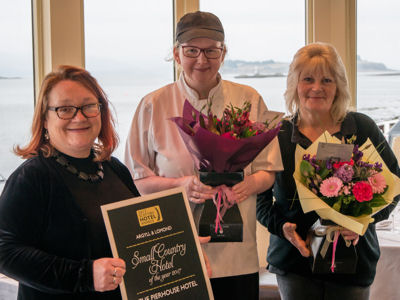 The Pierhouse team and hotel are Argyll & Lomond Regional Winners at the 2017 Scottish Hotel Awards.

We're delighted to report that The Pierhouse Hotel has won three 2017 Scottish Hotel Awards in the Argyll & Lomond Region: Small Country Hotel of the Year, Family Hotel of the Year and Bar Dining Hotel of the Year. We are really happy to have come out on top in our region for these three awards and are looking forward to the national finals in April.

Hotel Manager, Caroline Willis was at the ceremony in Glasgow this week to bring the awards back to The Pierhouse team. She was particularly 'chuffed' to receive the Argyll & Lomond region Small Country Hotel of the Year award as it is considered to be a fiercely competitive category. The judging criteria included "First impressions are important: location, presentation and exterior charm all being noted by judges. Hotels need not necessarily be traditional in style / décor but must be genuinely ‘country’ in feel: we mark up welcoming smiles, open fires / stoves, a mix of restful and cosy places, warm and characterful bedrooms. Local information must be excellent. Establishments should have as much the sense of place as any other aspect: local provenance is a must and breakfast is considered very important."

We're also over the moon to see members of The Pierhouse team receive Scottish Hotel Awards recognition for their work. Three of our team were named 2017 Argyll & Lomond Regional winners: Laura Milne received Hotel Chef of the Year award, Sergejs Savickis won Hotel Sous Chef of the Year and Janette Jack was named winner of the Argyll & Lomond Housekeeper of the Year. Congratulations to Laura, Janette and Sergejs. (Sergejs missed out on the bouquet of flowers as he's on a well-deserved break from the kitchen right now.)