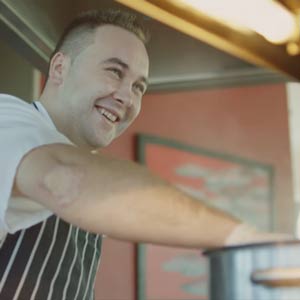 Sous Chef Sergejs from Latvia joined us over the winter. With a passion for seafood and a love of Scotland's west coast, Sergejs has fitted right in to life at The Pierhouse.

Sergejs joined us as Sous Chef just before Hogmanay 2015 - and set straight to work at one of the busiest times of the year for the hotel kitchen.

Originally from a small town in south west Latvia, Sergejs studied away from home before joining Latvian Railways where he worked with rolling stock. He'd always loved cooking though and after moving to Scotland at aged 22, Sergejs worked in Glasgow hotels, trained as a Chef and became a Commis Chef at One Devonshire Gardens and Dunblane Hydro. He then worked his way up until most recently working as an accomplished Head Chef at a seafood restaurant in St Andrews.

It was while there that Sergejs took part in the "Scotland. A Spirit of its own" campaign for Visit Scotland. In the #scotspirit video Sergejs shared his passion for seafood with the nation.

What brought Sergejs to us here at The Pierhouse? The draw of the west coast - as Sergejs told us "The longer I stay on the west coast the more I fall in love with it!" Sergejs really likes the concept of our direct contact with our prawn fisherman Hughie and oyster farmer at Caledonian Oysters.