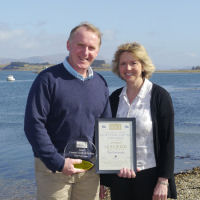 We're delighted to have won two prestigious awards at the 2013 Scottish Hotel Awards in Glasgow on Sunday.

The Pierhouse Hotel has been named Small Country Hotel of the Year 2013 at this year's Scottish Hotel Awards. Nick Horne who attended the awards ceremony in Glasgow at the weekend said "We're absolutely delighted to have received this award - it's a real boost for the whole team and is, we hope, a reflection of The Pierhouse's warm welcome, relaxing atmosphere and very special lochside setting."

Just when Nick thought it was safe to retire for the evening, The Pierhouse received yet another award: the Seafood Good Food Award. That's the second year running that The Pierhouse Seafood Restaurant has received the only seafood award at the Scottish Hotel Awards - a testament to Head Chef Tim Morris' approach to our food - the best quality local produce simply cooked to perfection.