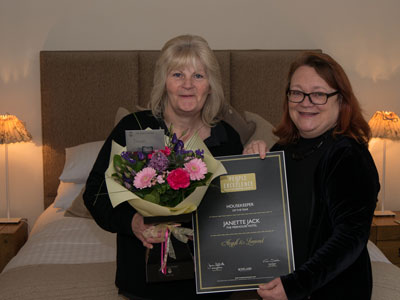 Head Housekeeper, Janette Jack, is perhaps one of the hotel's unsung heroes....until now.

Having lived on the island of Lismore for many years with her family, Janette travels daily on the little ferry from the island to The Pierhouse pier in Port Appin.

Attention to detail, thoroughness and efficiency are Janette's hallmark and she's built a superb team of housekeepers. 7 years in the role and Janette's sense of humour is still as sharp and lovable as the day she started. With the ebb and flow of hotel guests enjoying their west coast breaks, Janette and her team work very hard throughout the season to prepare each bedroom to a consistently high standards for our guests' arrival - no mean feat in a hotel as busy as The Pierhouse.  Janette takes great pride in the cleanliness and presentation of the rooms, the beautifully pressed linen throughout the hotel and restaurant along with the neat and tidy public areas.

Very much a hands-on Highland lady, Janette leads by example day after day never missing a beat or a speck of dust.  Janette is worth her weight in gold and we were delighted when she recently received recognition for all of her hard work by being named Head Housekeeper of the Year, Argyll & Lomond Region at the People of Excellence awards run by Scottish Hotel Awards. Janette and fellow regional winners go on to the Scottish Hotel Awards national finals in April.

Photo: Caroline congratulates Janette (on left) on being awarded the 2017 People of Excellence Head Housekeeper of the Year, Argyll & Lomond Region