Breakfast at The Pierhouse 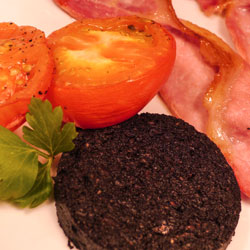 We don't often mention breakfast here on The Pierhouse Blog - we're too busy enthusing about the lovely fresh seafood and tasty steaks and venison on the a la carte menu. So we thought we'd experience The Pierhouse breakfast for ourselves one Friday morning......

The morning skies were cloud-laden, the sea was still, with a Springs high tide pushing the sea well up the pier. The Lismore ferry had already done a couple of runs and was tied up waiting for the day's walkers and cyclists to appear. Such was the view from our breakfast table as we watched the low cloud gradually lift to reveal the other side of the loch, the Morvern hills and the sunshine peeking through. Our attention was soon diverted to the breakfast menu....so much choice, what would we try?

For me, the difference between an average breakfast and a lip- smackingly delicious breakfast is the quality of the cooked meats. At The Pierhouse, the beautifully cooked smoked bacon and pork sausages were really tasty and I'm reliably informed by my 'better half' that the Stornaway black pudding was equally delicious. Made by Charles Macleod family butchers on the Isle of Lewis, this award winning pudding is made from a family recipe dating back to 1947 and is known as a 'taste of the islands'. If meat is not your thing, the plates of scrambled eggs with local Inverawe smoked salmon looked tempting and we did spot Inverawe smoked kippers on the menu too!

A big thank you to John, Nikki and Alex for looking after us so well, as always. The good news is that non-residents can also enjoy this fantastic start to the day - £15 for the full Scottish breakfast and £10 for Continental breakfast. Go on, start your day in grand style!